Here you'll find information and links to Lana Del Rey's music videos. Videos were made to accompany her released singles as normal, aswell as some promotional singles, but there also exist some home made videos to accompany her earlier work. This of course includes the video for Video Games, the one that caused her to be a viral hit, launching her into stardom.

In the home-made movies, she alternates between clips of herself recorded with a webcam and scenes/stills from favoured movies. It is hard to determine whether all home made videos are official, however, and not just edited by fans.

Be My Baby Tonight (Lolita)[]

Be My Baby Tonight was another name for, or possibly the early version's name of, the song Lolita, which is featured on her Born to Die album. She created a home-made video of the song, the audio we hear is that of the demo version.

The second version leaked the 14th of October 2012, all links for it have disappeared, however.

Blue Jeans was the third single to be released from the Born to Die album. It was directed by Yoann Lemoine. There are two videos to watch, one home-made like Video Games, and an official video.

Lana's tattooed love interest is model Bradley Soileau, who also plays her beau in the Born to Die video. It seems to depict another fatal attraction, a heavy theme in her music.

Watch the home made video here!

And watch the leaked video here!

Blue Velvet was part of the H&M advertising campaign, and was released as a promotional single. Rather than shoot a typical advert for the campaign, they decided to shoot a full length music video, directed by Johan Renck.

The video shows Lana singing in front of an audience, some of them her clones. In other scenes she is being hypnotized, and sitting at a dressing table with a sailor on the bed nearby. It has been compared to the works of David Lynch. The video also possesses some reference to Lana's nay-sayers. At the end of the video, a 'little man' pulls the plug on her singing career, and she merely smiles away.

Born to Die was the second single released from the Born to Die album, and an official video was made to accompany it.

In the official video we see Lana with her beau, the model Bradley Soileau, in a seemingly passionate but unstable relationship. They set off in a car trip with an unfortunate ending. This is alternated with scenes of Lana sat on a throne in the Palace Chapel, beside two tigers.

Brite Lites was a song that featured on Lana's Lana Del Ray a.k.a. Lizzy Grant album, as well as an earlier EP. The audio heard in the video is the later album version, the video to accompany it is home-made.

Carmen was released as a promotional single in Germany, Austria and Switzerland in January 2012. In April that year, she released a music video online to accompany it. She directed it the video and features in it herself. I have read of there being two versions, but I am yet to encounter an official second.

The video is made up of images and brief scenes, portraying both the glamour and dark side of the high life, fitting in with the lyrics and meaning of the song very well.

The video ends with the song “Gymnopédie No.1” by Erik Satie.

Lana quoted Walter Whitman's I Sing the Body Electric poem in the comments section of the video, possibly as a teaser to her upcoming Body Electric song.

Apparently a homemade video exists, but it has not yet been released.

A music video for Lana's cover of Leonard Cohen's song 'Chelsea Hotel No 2' was published on Lana's official Youtube account on the 27th of March, 2013.

Lana stated in an interview that she would release a video for this song in September 2012. This time has come and gone, however, and given her busy schedule it seems unlikely we will get one.

Diet Mountain Dew was made in 2011 by Lana, in her usual home made style, with two versions. She donned various blond wigs, and the heart shaped sunglasses mentioned in her lyrics. The song was later used on the Born to Die album.

The audio heard in this video was the early demo version of the song.

Lana had the video uploaded on her own account on Youtube, but it was taken down due to copyright infringement.

And the second version here!

Gramma, or Blue Ribbon, was a track that featured on the Lana Del Rey AKA Lizzy Grant album and the earlier EP Kill Kill. There are apparently two home-made videos for the song, and up to 5 unreleased versions.

And watch the second here!

Hundred Dollar Bill had a homemade video, featuring herself and clips.

Jump featured on her Lana Del Rey a.k.a. Lizzy Grant album and the No Kung Fu EP. A homemade video leaked on the 14th of October.

Kill Kill was believed to be made in 2008, edited by Lana herself. The song featured on her Lana Del Ray a.k.a. Lizzy Grant album, as well as an earlier EP. The video is home-made, and although I have only found one there are apparently in existence two versions.

Kinda Out Of Luck[]

Kinda Out Of Luck, like You Can Be the Boss , was made by Lana in 2011 and was supposedly an outtake from her Born to Die album. It remains unreleased. She made two home-made videos to accompany it.

And watch the second here!

Mermaid Motel was a song that featured on her Lana Del Ray a.k.a. Lizzy Grant album. She created a home-made video to accompany it.

The short video for (the equally short song) Methamphetamines leaked the 14th of October 2012.

National Anthem was the fifth single from her Born to Die album. An official video was premiered June 27th, 2012. It is 7 minutes 41 seconds long and was directed by Anthony Mandler. A home-made video also exists, the audio being the early demo version of the song.

The video opens with her singing Happy Birthday Mr President playing Marilyn Monroe, she alternates between her and Jackie Kennedy. She is singing this to her beau, John F Kennedy, played by A$AP Rocky. The footage we see of the two are home-videos of their lives. We are then taken to a reenactment of John F Kennedy's assassination.

Off to the Races[]

Off to the Races was a song that featured on the Lana Del Rey EP, and later the album. A home-made video was created to accompany it, but it does not feature herself.

Oh Say Can You See[]

Oh Say Can You See was a song that featured on Lana's Lana Del Rey a.k.a. Lizzy Grant album. There is supposedly a home-made video, but few people have seen it.

On Our Way video is homemade by Lana, featuring herself and clips.

Pawn Shop Blues featured on her Lana Del Ray a.k.a. Lizzy Grant album and The Money Hunny Recordings, the video leaked the 14th of October 2012.

Put Me in a Movie (Little Girls)[]

Lana stated in an interview that she would release a video for this song in September 2012. This time has come and gone, however, and given her busy schedule it seems unlikely we will get one.

Ride was the first single to be released from the Born to Die: Paradise Edition. It included a monologue, the words of which are posted here; 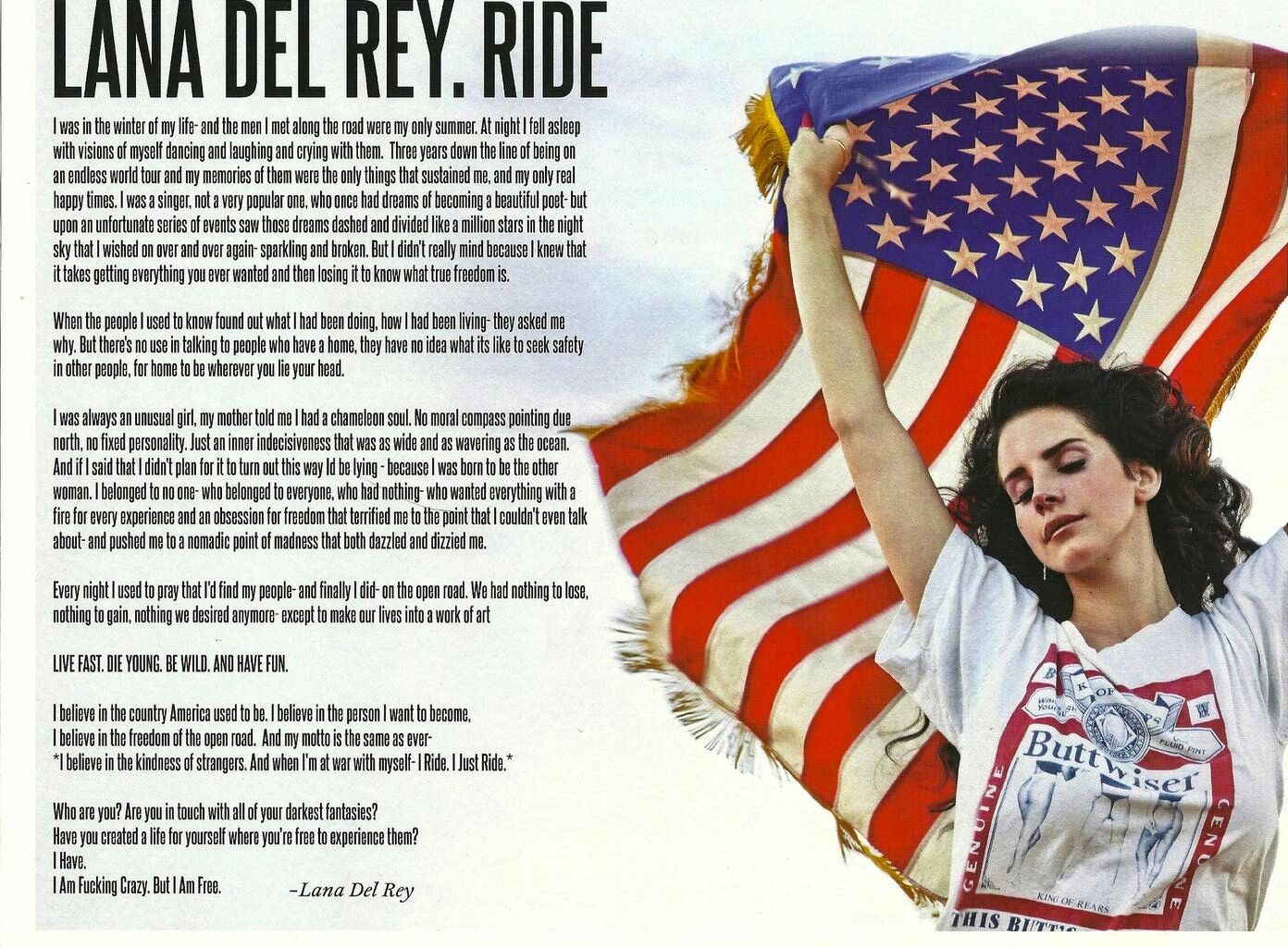 Shades of Cool was released as a single from Lana's new album Ultraviolence. Lana has mentioned this video was one of her favorites to have created.

Summertime Sadness was released as a single on the 22nd of June 2012 in parts of Europe. The accompanying video was recorded in the summer of 2012. Spencer Susser & Kyle Newman directed it, and it starred Lana and her friend, Jamie King. In it they play lesbian lovers who end their own lives.

July 30th, 2014 Noisey released a home-made looking video of Lana Del Rey in an unconventional looking wedding headdress and dress. Full with Lana's vintage style with its old effects, it definitely touched on Lana's Summer Wine and Video Games videos' roots. It is rumoured that a large scale production of the music video was made, only to be scrapped by her label.

Video Games is the song and music video that made Lana a viral hit, launching her career. The official video was kept as the home made one uploaded by Lana on her youtube account. It was edited by herself, and inspired by the films of Tim van den Hoff and Andrew Livingston. She uploaded the video with the taglines 'HOLLYWOOD SAD CORE SUMMERTIME SADNESS DOPE'. There are two versions, the rarer of the two being the original video.

Lana said of the video "Had I known so many people were going to watch the video, I'd have put some more eff­ort into it. I would have got my hair and make-up done and tried not to be so pouty, seeing as everyone talks about my face all the time. And I'd have put more of a storyline into it."

Because she had never intended the video for commercial use, she never asked for copyright permission, and so was sued.

And watch the original video here!

From Lana's new Ultraviolence album, comes the single West Coast. A video for it was published on the 7th of May, 2014. It stars Lana Del Rey, and love-interests Mark Mahoney, a legendary Boston-born tattoo artist, and Bradley Soileau, the tattooed model seen in her earlier videos like Born to Die.

Read a LA Confidential interview with Bradley about the video here!

This song itself has featured on EP's, her first studio album, and a remastered version will appear on the Paradise Edition of Born to Die. Linked below is a version of the song that is believed to have been created by Lana herself. Though because some clips of her singing are out of sync, it is hard to tell whether or not it's just a fan video.

You Can Be the Boss[]

You Can Be the Boss was a home made video Lana made in 2011. The song is unreleased, but believed to be an outtake from the Born to Die album. She created a home-made video to accompany it.

High by the Beach[]

Lana performs her new single 'High By the Beach' in a beautifully badass video.

Community content is available under CC-BY-SA unless otherwise noted.
Advertisement